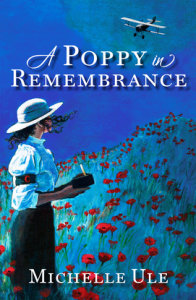 It’s the beginning of World War I, and throngs of British men are swarming the London streets, “in a line more than a mile long stretching to Trafalgar Square and blocking traffic.”

As Claire pulls up in a car with her mother, she jumps out over the sound of her mother’s objections, straight into the crowd, with one mission: to find her beloved cousin before he enlists right away.

She jumps up onto a lamppost to leverage her view, as an “approving male chorus eddied around her knees.” But she didn’t pay them any mind.

And as we follow Claire throughout the novel, she retains this fierce independence in a male-dominated era. Her dream is to become a journalist like her father, and she won’t let anything stop her — much less a societal expectation of women in that time.

She gets the chance to work for her father as a stenographer, and eventually meets Reverend Oswald Chambers — someone who makes her think about her faith in relation to the chaos happening around her. “She needed to figure out how such an intimacy with God could affect her peace of mind for an entire war, no matter what her parents thought.”

“The novel features several marquee characters (a real person in a novel), but the most important one is a British YMCA chaplain, Reverend Oswald Chambers,” Ule said. “As Chambers is the revered author of My Utmost for His Highest, I needed to ensure I had all my facts straight about him. So, I traveled to Wheaton College in Chicago to inspect the papers and photos from his time in Egypt during WWI.”

Claire then heads to Egypt in the novel as well, where she volunteers at Chambers’ YMCA ministry. From there, her life truly begins to take a turn as she navigates the grimness of the world during the war, all the while balancing love and her dreams — and it’s an empowering ride along with her.

To keep up with Ule, you can visit her blog by clicking here. She writes a bunch of interesting stuff not only about her novels, but her own journey of faith and love navigating the world.