Delve into Damnation in this Bay Area writer’s paranormal western 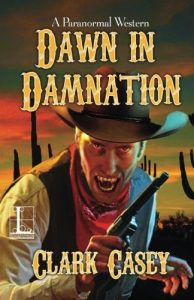 Let me start with this: Damnation is one awful place.

Imagine being stuck within a few square blocks of dilapidated buildings, an apocalyptic scene all around you. All around you is dust and more dust, stuck in the wildest west. Walk down the road to leave, and you end up walking straight back into the ghost town — “You could see the whole town from end to end in the time it took to smoke a pipe.”

And ghost town is an apt description, as everyone here is dead. Well, sort of.

Did I mention that all there is to eat is pig? Bacon. Pork. Whiskey. Repeat. Swine fed by the bodies of those who died in gunfights.

I wasn’t sure what to expect when I started “Dawn in Damnation” by San Mateo writer Clark Casey. If you’re sensitive to gore, violence, or horrible men being horrible, this may not be the book for you.

I’m one of those people who are sensitive to the above things, and I’m definitely NOT into western-style stories. So I was surprised when I ended up enjoying this book, for the most part. Plus, it’s a quick read.

“I wanted it to read kind of like Robert B. Parker’s ‘Appaloosa’ books, with short, quick chapters and a lot of dialogue,” Casey said. “In my opinion, most books have entirely too many words.”

Damnation is where you go when you mess up in life — hurt someone, make a horrible choice, you get the idea. Not quite Hell yet, but a pretty grim pit stop. So it makes sense that this group of gross, horrible men (save for possibly a few characters, including the protagonist) is cursed to play poker, eat bacon, and wallow in misery until they shoot one another.

“There are definitely a few crude characters,” Casey said. “I was trying to create an authentic late 19th century town full of outlaws, so it would have been hard to avoid that.”

Casey said he drew inspiration from the HBO series Deadwood and True Blood, and he thought it would be fun to combine the two concepts. So naturally, there are plenty of vicious werewolves that live down the street. And the lone, angsty vampire, Nigel.

Put enough of this book’s characters in the same small space, and you’re bound to have chaos.

And when the rare woman comes to damnation, Ms. Parker, who died while she was pregnant, we really start to see things get out of hand.

And I found myself more fascinated than anything by the vulgarities the different characters spewed, and it added an authenticity to what kind of place Damnation really is (it’s seriously the worst).

Half of the entertainment to be had in Damnation is gunfights. But our narrator, whose occupation in purgatory is to write “The Crapper,” the town’s news on who has showed up and who has moved on, wants to break that chaotic cycle. His theory? You can get into Heaven if you don’t shoot anyone in Damnation for a year. Most people, though? They know they’re going straight to hell.

And Casey uses this sort of second afterlife to show how difficult it is for humans to shift their morals. When a newbie shows up, wide-eyed and confused, he wonders why the town doesn’t have a system of government, or a sheriff, ignorant of the bloody history behind the last time someone tried being sheriff. He envisions all of the town’s prisoners being able to stick together and “march straight up to heaven together.”

But as our narrator notes, “When’s the last time you seen a fella do what’s best for him? You think if you pluck a man from his life and stick him in a one-horse town with a hundred other rotten bastards, he’s gonna act better?”

One of the few redeeming characters, Buddy, does get fed up eventually though. This led to one of my favorite spots in the book, the new list of rules for Damnation:

This kind of humorous tone is present throughout the novel, giving much-needed comic relief after some of the more traumatic fights. At the end of many chapters, you get to see the latest edition of “The Crapper,” and it’s these little touches make the novel so much more enjoyable.

The thing that for some reason really kept me going in this novel was the same thing that drove the characters crazy throughout the story. What really is Damnation, and what comes afterward? And what drives a person’s morality, when fear is no longer a factor?

So is this a family-friendly novel? Nope. Does it have horrible men? Yup. But it’s a fun, quick, Western-style tale that is worth an entertaining afternoon read? Most definitely.