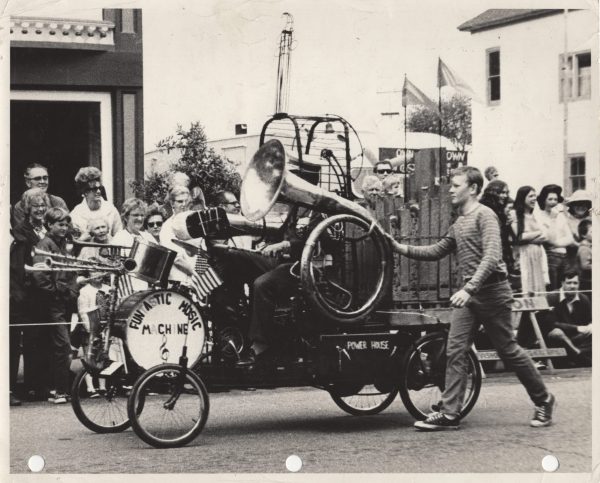 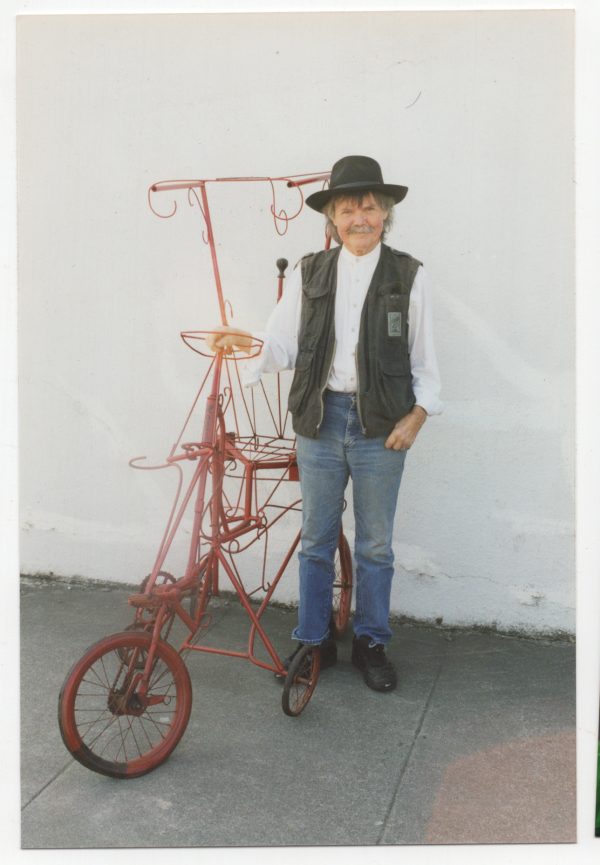 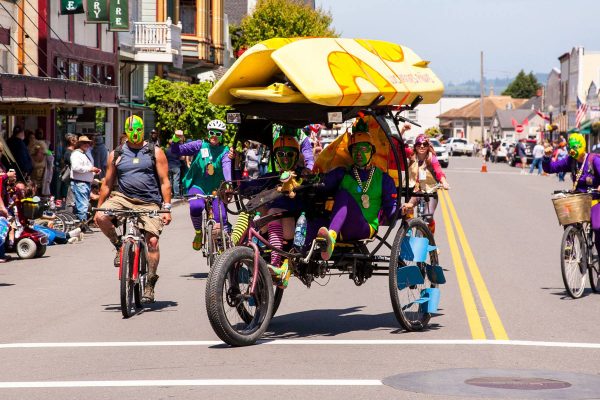 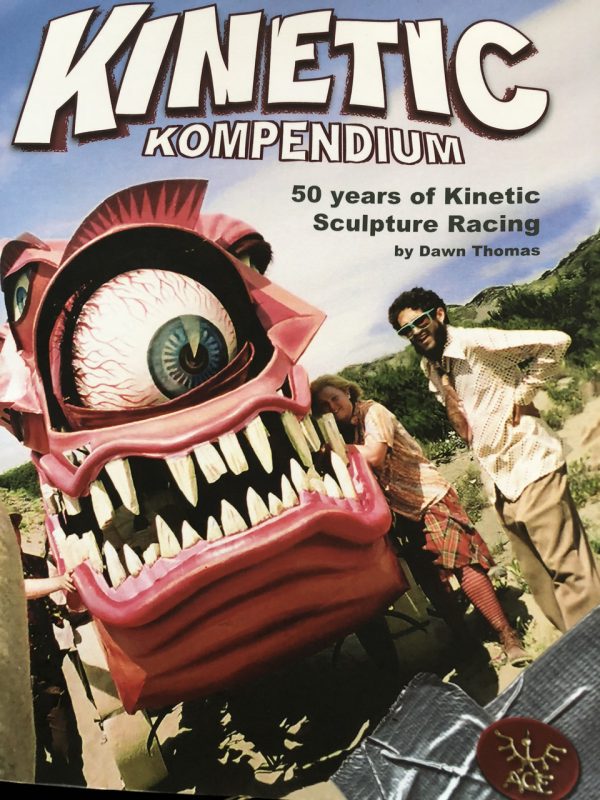 Hobart poses with his Pentacycle.

Dawn Thomas and her partner ride into Ferndale, where the race ends. (Tina Kerrigan)

Imagine a giant, colorful monster rolling toward you in the middle of the street.

And next to the monster? A dozen or more equally colorful creations, all racing to win.

And you can see decades’ worth of these fantastical works of art in a new book, “Kinetic Kompendium: 50 Years Of Kinetic Sculpture Racing.” The author, Sonoma County artist Dawn Thomas, has been racing for the past few years.

So where did it all begin? Well, naturally, in 1968, with a child’s tricycle, two metal workers and a friendly rivalry, the race itself came to life. Thomas said the concept of kinetic sculpture racing originated in Ferndale in 1969 when local sculptor Hobart Brown “improved”  the appearance of his son’s tricycle by welding on two additional wheels and other embellishments, calling it the “Pentacycle.” Fellow artist Jack Mays then challenged him to the race, and a tradition was born. Neither of the two even won the inaugural race — Thomas said the first winner was Bob Brown of Eureka, whose sculpture was a “smoke-emitting turtle that laid eggs.” Who could ask for more in a work of art? Even then-Congressman Don Clausen famously took the Pentacycle for a spin, Thomas sad.

Among the hundreds of other creations over the years have been sculptures from “Chicken and Waffles” to “The Nightmare Of The Iguana.”  Thomas said many of the themes are puns.

“The artwork is often a statement of the folks who made it,” Thomas said. “Some folks really like to go all-out and pretend they are aliens from another planet, while others are content to do minimal decorating, and try and go fast.”

But, Thomas said, Brown always believed that the race requires both art and speed to be a success.

The rules aren’t quite easy either. The course is now 50 miles and takes 3 days, Thomas said, with sand dunes and two water crossings. Contestants need to carry equipment they need, including sleeping bags and toothbrushes. The most challenging aspect? Their feet must not touch the ground to propel them forward, Thomas said.

“This race attracts Polymath,” Thomas said. “Folks need STEAM skills: Science, Technology, Engineering, Art and Math to build and race these sculptures. It encourages folks who are really good at one thing to find folks who are good at other things, to work together to build the best sculpture.”

Thomas said she’s been hooked on the sport since her and her partner entered the race six years ago. The tandem trike’s theme? “Trike-a-saurus,” decked out in “with Stegosaurus-like plates of recycled plastic.” After a harsh but fun first race, Thomas said she was relieved to return.

“When we rolled into Ferndale I was so relieved that I ran off to a Port-a-Pottie and broke down and cried,” she said. “We have been hooked ever since.”

Thomas sought out all of the material she could on the race, but she found that resources were lacking — so, she made her own. The result is a chronological, coffee-table style book filled with a fascinating history of the race. The history is meticulously presented, but the best part? The photographs. Each picture emits the innocent, playful joy that the racers feel, and that’s truly the spirit that has kept this race a tradition. There also are photos of historical documents related to the race.

You also get to see examples of past works of art, which are truly remarkable. My personal favorite? The band on wheels, also known as the “Funtastic Music Machine.” It’s piled with horns, drums and more. Though as the book points out, it might have had trouble traversing the required aquatic portion of the race.

And in the second half of the book, we get to meet the winners of the competition, as well as see photos of their winning artwork. It’s wonderful to see the moments of this race frozen in time, and to see how connected the community seems.

“After our first year we knew we had found our people,” Thomas said. “Folks welcomed us, helped us, fed us, and treated us like one of the family. Now, 5 years in, I know so many of them, and am so impressed at what a big place the race has in their lives. They spend so much time and energy on their sculptures … It is incredible.”

You can find the book on Thomas’ website, kinetickompendium.com, and on Amazon. This year’s event, over Memorial Day weekend, will be an especially incredible one — the 50th anniversary. The championship will begin on Saturday, at the noon whistle on the Arcata Plaza. Racers will circle the Plaza three times, in front of hundreds of spectators, then head out to through the Arcata Bottoms to the Manila Dunes.

So, what’s the point of it all? Well, a quote from Brown at the beginning of the book might put it best.

“We’re adults having fun so children desire to grow older.”